Contrary to popular belief, it’s not Internet speed or bandwidth alone that matters most for online games to have the best experience – what really matters is what we call “The Three Lows and One High of Gaming.” 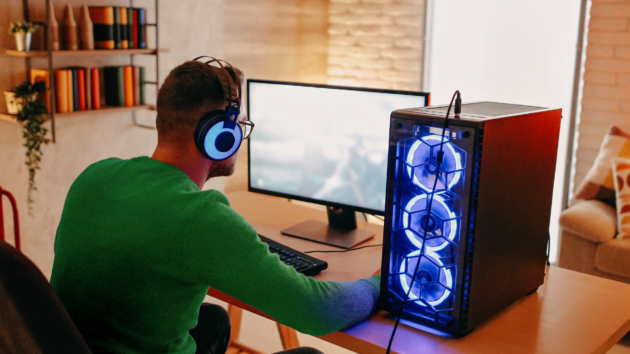 We’ve all been there: you’re dominating a lobby. Sitting at the top of the leaderboard. And the fun comes to a screeching halt – because of lag. Often, the difference between life or death online is quite literally a split second. With so much interest in gaming these days, especially as people try out all the new toys they got over the holidays, gamers are looking for any edge to get and stay on top.

Online gaming has exploded in popularity over the last few years and many experts expect global revenues to explode to nearly $200 billion by the end of 2022. With so many PCs, game consoles, games and subscriptions recently given as holiday gifts, it’s no wonder online gaming is considered one of the world’s fastest growing industries. This is big business not only for the platforms, but also for individual players, many of whom use their streams as a primary source of income, making the quality of their stream critical to their livelihood.

Regardless of where we play or if we stream, we gamers want to win, so we’re going to do whatever we can – buy the best system, use the most touch-sensitive controller and have the best Internet connection – to give ourselves an edge.

That’s why I’m confident saying that if there’s one thing that can help make a gamer’s performance even better, it’s having a fiber-optic Internet connection. To understand why, I’m gonna get a bit technical: 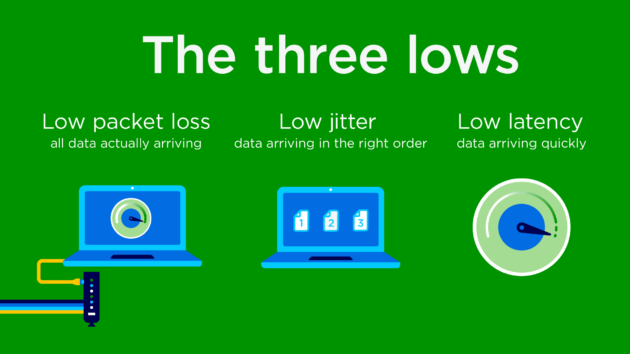 “The Three Lows and One High of Gaming”

Contrary to popular belief, it’s not Internet speed or bandwidth alone that matters most for online gamers to have the best experience. While speed is great for downloading games, it isn’t the most critical for game play. High bandwidth also can be important for those of us who stream or play cloud-based games but it’s still less important than what we at Ziply Fiber call “The Three Lows and One High of Gaming”:

Packet loss happens when pieces of data don’t arrive, which can cause performance degradation, something you absolutely do not want while gaming. Jitter typically occurs when packets don’t arrive in the same order they were sent which can cause audio and/or video to buffer or lag. Latency or delay is the amount of time it takes for packets to get from their source to their destination, something critical to seeing the things you’re doing with your controller and keys happening on-screen. Too much delay degrades performance and is again something you absolutely do not want while gaming. Gamers want low packet loss, low latency, low jitter and high bandwidth. Only fiber can reliably deliver all four of these at the same time. 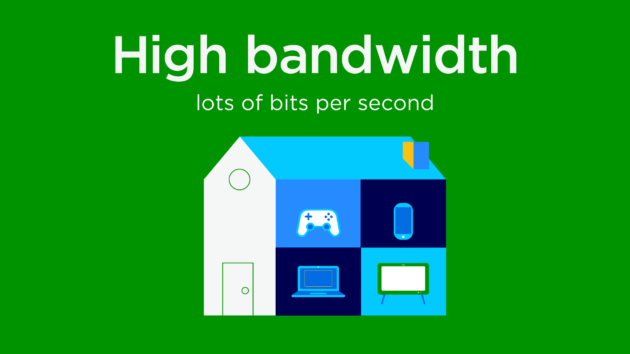 Why only fiber can deliver “The Three Lows and One High”

Only fiber-to-the-home Internet connections like we offer at Ziply Fiber can consistently deliver all The Three Lows while still delivering high bandwidth, elevating a gamer’s experience and increasing performance for all applications. Now there’s always going to be some delay since light is fast but not instant, so let’s look at what can impact performance:

First, let’s talk physics. Fiber uses light that turns on and off to create the 0s and 1s of data. The basis for the speed of fiber is, quite literally, the speed of light. Specifically, it’s the speed of light multiplied by the index of refraction which for most single mode fiber yields a propagation speed of about 200,000 KM/sec. But suffice to say it’s super-fast and there’s nothing that can be faster under the laws of physics.

Next, let’s talk technology and equipment. ISPs like Ziply Fiber use a passive optical network, a.k.a. PON (or G-PON for gigabit-capable PON), to deliver fiber-to-the-home. G-PON limits delay to 1.0-1.5 milliseconds, wicked fast and exactly what you want while gaming. In contrast, many Cable ISPs use DOCSIS over networks that are primarily constructed using a mix of fiber and coaxial cable (HFC), a configuration that was originally designed for the distribution of TV.

Today, the vast majority of cable networks are deployed using DOCSIS (3.0 and 3.1) standards which by their vary design have highly variable latencies depending on traffic loading from a few milliseconds to tens of milliseconds according to papers published by the Ethernet Engineering Task Force (IETF). This added latency and jitter is a large impediment to high performance and consistent broadband and prevents a cable connection from ever working as well as a fiber connection.

Even fiber is not all created equal. Here at Ziply Fiber we have no more than 32 customers per PON port (and each of our PON ports supports a throughput of 12.5 gbit/sec down and 11.5 up). Each of those 32 customers gets their very own dedicated fiber strand directly to their home from our splitters, which allows us to quickly add capacity and upgrade to new technology without rebuilding anything in the street. Cable ISPs, on the other hand, often run hundreds of customers per node while simultaneously having less bandwidth per node than our splitters do. So, if you’re on cable you are sharing your gaming connection with hundreds of other people. This shared connection means you’re likely to have more network congestion and when you’re congested this means jitter, latency and packet loss go up.

Even if you happen to be the only one online and congestion is low, jitter and latency are higher than on fiber because of the technology – there’s simply more noise on a coax network. Noise is often caused by electromagnetic interference from nearby cables or power sources or radio transmitters. A gaming experience – or really any online experience – can be impacted by the signal-to-noise ratio is on your line. A low signal-to-noise ratio means less of the broadband signal is getting through because of all the noise, meaning more jitter and more delay.

Additionally, many ISPs have designed their core network for their own convenience and not minimum latency for their users. We design our network to provide the physically shortest paths from our customers to the peering and interconnection locations where content is located, this allows our users to get the best path and lowest latency possible. These routes are then lit with massive capacity which allows us to offer a service free of data caps and congestion. Unlike Ziply Fiber, many other ISPs have instituted or officially announced plans for data caps, ultimately making those gigs more costly for gamers. That makes us especially proud to be the highest-ranked, no-data-caps ISP in the Northwest for gaming in 2021 by PC Magazine. That’s Ziply fast! 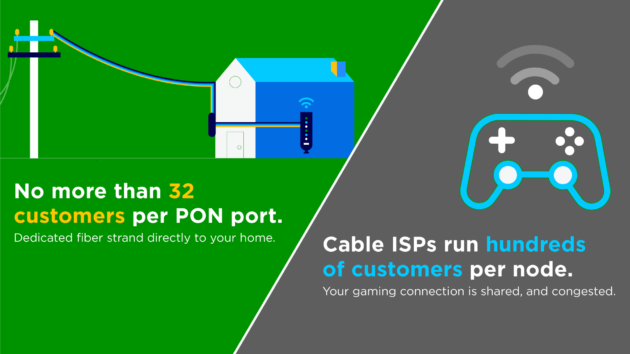 Questions for gamers to ask

If you’re a gamer and want to boost performance, take a look at your system and see what you can do to invest there. Also do some research on your Internet options. Here’s your checklist:

If the answer is no to any or all of these, it might be time to consider a fiber alternative so you can focus on playing your games and not your ISP playing games with you.

Faster downloads, better streaming: why a gamer’s New Years resolution should be a network upgrade

Read Faster downloads, better streaming: why a gamer’s New Years resolution should be a network upgrade by TechRadar

Read NBN plans for gaming in 2022 by GamesRadar on MSN.com

Get The Best Gaming Experience With RCN

Read Get The Best Gaming Experience With RCN by RCN

CenturyLink home internet review: A fiber deal worth your attention

Read CenturyLink home internet review: A fiber deal worth your attention by CNET